This event provides an opportunity for you and the U-M community to experience and honor Native American heritage and history.

The U-M Annual Dance for Mother Earth Powwow is one of the largest Powwows in the country hosting some of North America’s greatest Native American singers, dancers, and artists.

We welcome the entire community to take part in celebrating this rich culture! This is your opportunity to witness Native dance and drum contests shop with Native artists and craftspeople, and dance alongside Natives of all ages and nations.

The Powwow was started in 1972 by a community group, American Indians at the University of Michigan (AIUM), at that time primarily a staff, faculty and graduate student group. The Native American Student Association (NASA) which primarily was an undergraduate group was formed in 1976, at which time they began helping out with the Powwow as well. Traditionally, every year NASA would evolve into a group whose emphasis was planning the powwow. This group consisted of community members and students (undergraduate and graduate students alike) who work year-round on making Powwow a success by fundraising and publicizing for the up-coming year. Each year, the Powwow grew to be bigger and better and it was then that the Powwow was brought under U of M’s financial umbrella which was in 1982.

The Powwow has had a number of locations, including Huron High School, the League, the Union, Ypsilanti’s Cleary College, the Coliseum and Pioneer High School. In 1990, it moved to Crisler Arena, where it immediately doubled in size and where it remained until 2008.

In 2008, the powwow committee at the time consisting of NASA members and community members made the decision to turn down direct funding from the University of Michigan. The powwow was then moved to Saline Middle School in Saline, Michigan, just south of Ann Arbor. There is no reduction in the size of the powwow with this move. This field house-type was found ideal for the facility had more room for vendors, was handicap accessible and had adequate amenities for visitors and participants. 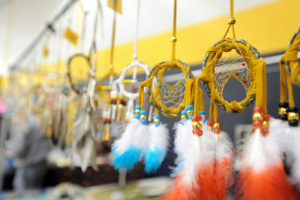 In 2012, the Powwow was relocated to Pioneer High School which is across the street from the Big House. The members of NASA were able to revive and develop new relationships with multiple offices and departments across the university in an effort to help the success of the Powwow. This decentralized the planning workload for students and offices while retaining leadership with students of NASA. Providing not only an opportunity to share our Native Heritage with our campus, but also an experience to gain true leadership skills as students.

For the past several years, we have held the powwow at Skyline High School with assistance, collaboration and staff support from the Office of Academic and Multicultural Initiatives.

The Powwow Committee has been privileged to work with many coordinators since its beginning. These coordinators have helped the Powwow’s attendance increase dramatically, strengthened the Powwow’s ties to the local community, expanded the educational aspect of its mission and aided the committee in many ways.

If you are an Alumnus of NASA please reconnect by emailing nasa.exec@umich.edu to see what we are doing these days!